Gernot Ziegler (Dr.Ing.) is an Austrian engineer with an MSc degree in Computer Science and Engineering from Linköping University, Sweden, and a PhD from the University of Saarbrücken, Germany. He pursued his PhD studies at the Max-Planck-Institute for Informatics in Saarbrücken, Germany, specializing in GPU algorithms for computer vision and data-parallel algorithms for spatial data structures. He then joined NVIDIA’s DevTech team, where he consulted in high performance computing and automotive computer vision on graphics hardware. In 2016, Gernot has founded his own consulting company to explore the applications of his computer vision expertise on graphics hardware in mobile consumer, industrial vision and heritage digitalization. His talk will take place on Wednesday, December 14th, 2016, 1pm in room E105.

Abstract: In algorithmic design, serial data dependencies which accelerate CPU processing for computer vision are often counterproductive for the data-parallel GPU. The talk presents data structures and algorithms that enable data parallelism for connected components, line detection, feature detection, marching cubes or octree generation. We will point out the important aspects of data parallel design that will allow you to design new algorithms for GPGPU-based computer vision and image processing yourself. As food for thought, I will sketch algorithmic ideas that could lead to new collaborative results in real-time computer vision. 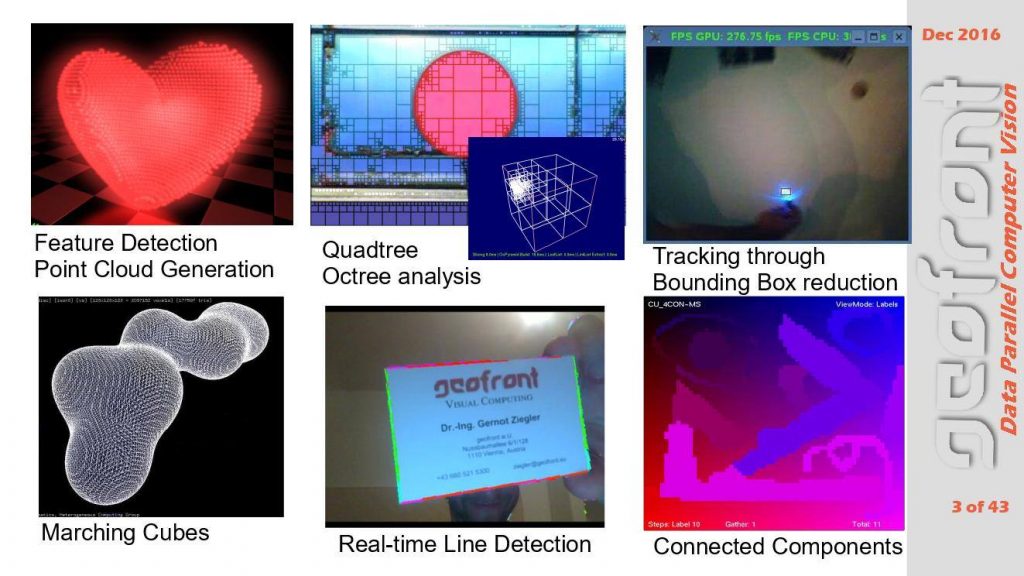 Video recording of the talk is publicly available.